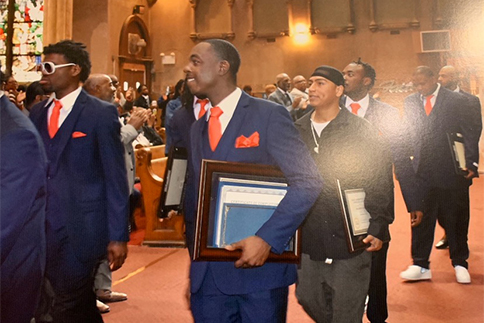 From Dealing Drugs to Leading Prayers: How Quentin Harris Changed His Life

For years, Quinton Harris barely saw his grandmother, the woman who raised him. As a young man, Harris, now 31, “I was running the streets, selling drugs,” he says. “I was hustling. Playing with guns, scheming.” It went against everything his grandmother taught him. “I used to refrain from going to see my grandmother because when I come into the house, she already knows what’s going on,” he says. “She’d say, ‘What you been doing? Why you got all this money? Where did it come from?’ Me doing things I wasn’t supposed to kept me from going to see her. And that’s one of the people I love most.” 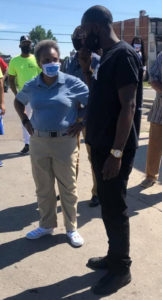 It took a change of heart—and the persistence of a friend—for Harris to turn things around. Malcolm Davis started talking to Harris about participating in a new project of his, the MAAFA Redemption Project, a faith-based residential program helping at-risk Black men in Chicago. “We were in our mess together in the streets,” recalls Harris. “He was telling me about MAAFA, but me being so far gone, doing what I was doing, I didn’t pay him any attention. I always brushed him off.”

Eventually, says Harris, life wore him down. “Running the streets so much is tiring,” he says. “You don’t have any peace. It’s hard to sleep at night. There was a lot of lying, a lot of violence, a lot of snakes. Then a lot of the little guys I grew up with, they were dying or going to jail. I felt like I needed a change. So one day I took a leap of faith.”

Harris walked through the doors at MAAFA and hasn’t looked back.

MAAFA is one of five organizations in the Live Healthy Chicago initiative, which is supported by the Oprah Winfrey Charitable Foundation to help thousands of families in predominately Black and Latino communities in the city during the pandemic. Live Healthy Chicago offers wellness visits, contact tracing and care packages, and invests in the long-term recovery of those who most in need, like Harris once was. In building this coalition, Winfrey reached out to local organizations, bringing together MAAFA, West Side United, Rush University Medical Center, My Block My Hood My City and Forty Acres Fresh Market. The initiative’s efforts complement the work done by City of Chicago’s Racial Equity Rapid Response Team, which West Side United helped convene in April 2020 at the request of Mayor Lori Lightfoot.

“Here at MAAFA, we’re a ministry first,” says Harris. He says the beginning was tense, because men from competing neighborhoods were all living together. “When I started MAAFA, it was a lot of different guys from different neighborhoods. It was weird. There’d be a lot of tension between meals. Then we started praying together every day, eating together. I found out we had similar struggles. Having  men who’ve been through what I’ve been through, who share the same struggles as me, lived in the same neighborhoods, explaining the word of God was amazing.”

Gradually, Harris could feel a change happening. “I was seeing men who’ve been to jail, who had been shot, who were stabbed, and they changed.” Eventually, Harris rose to be a leader at the residence. “They always pushed me,” he says. “That unity, that camaraderie, that brotherhood, that’s what helped me the most. Having somebody believe in me.”

Harris returned to school and received his diploma. He got OSHA-certified (Occupational Safety and Health Administration), allowing him to work in the construction field. “I’ve learned how to paint, put in floors, baseboards, rot out sewers,” he says. “I have learned to do so many different things that I never thought I’d be able to do.” 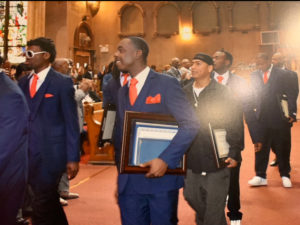 In January 2021, Harris starts college at Southern New Hampshire University, enrolling virtually, with an eye toward business and communications.

In addition to construction and school, Harris works for MAAFA, where he is an executive assistant and alumni coordinator, along with a junior life coach. His goal is to continue to give back to the community, to help other young men, be a role model, which he didn’t have growing up on Chicago’s West Side.

“My father was in and out of jail and he was also a heroin addict,” he says. “I loved him, but he couldn’t be around as much as I needed him. He passed in 2009 from an asthma attack that was a partial overdose. My mother worked a lot. I was mostly raised by my grandmother. Everybody was at Grandma’s house. My grandmother is an amazing woman. Now that I’m older, I see the great example she is.”

These days, says Harris, “I’ve just been working to be better, helping the community, doing things that help out the church. And most of all, helping my younger brothers be better. So they don’t have to take the same routes and the same path that I took.”

And when he sees his mom and grandmother? He says, “Now I’m able to make them happy, make them proud. It’s amazing. It brings so much joy.”