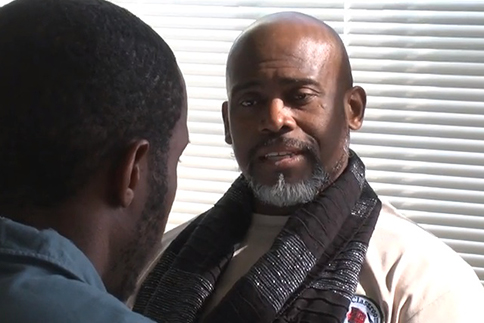 by 8835pwpadmin
Impact Stories
In Baltimore’s rat-infested alleys and abandoned lots, John Jones could—with a shovel, a broom and a trash can—make a game out of impossible-looking cleanup.

“I’d get to a yard with trash piled six feet high and say to the crew, let’s see if we can get this done quicker than we did the last one,” recalls Jones of his first job after spending 30 years in prison. “We joked a lot while we worked and guys used to say, ‘John, why are you so happy about this? Man, you’re earning $7.25 cleaning!’ And I would tell them I used to make 85 cents a day making signs in prison and now I’m free, I’m paying bills, I’m living the life I wanted to live all along.”

As one of the 150 men and women employed each year in the Living Classrooms Foundation’s job-training program called Project SERVE, Jones didn’t last long in the alleys at minimum wage. By design, the program spends four to six months giving members—most of them coming directly from substance-abuse treatment or incarceration—marketable job skills and work experience before transitioning them into employment elsewhere in the vast LCF network of education and wellness programs that, with $2 million in support from the Oprah Winfrey Foundation, annually serves 30,000 at-risk youth and adults in Baltimore and Washington, DC. “John is a very gentle man, very sincere and a very powerful example,” says the foundation’s CEO James Bond. “Members look up to him.”

Steadily climbing through the ranks—from neighborhood cleanup to administrative work in Living Classrooms’ early childhood center, and then back to Project SERVE as its operations manager—Jones became a leader and a mentor, says Bond, in a program where graduates have a less-than 15 percent recidivism rate compared to Baltimore City’s rate of 52 percent.

“John could be off doing other things, making more money,” says Bond. “But he is all about giving other people the same kind of help that he once needed himself.”

Jones says he found purpose on every rung of the Living Classrooms ladder out of post-incarceration poverty: “I didn’t love picking up trash and exterminating rats, but then the elderly woman that’s next door comes out and says thank you and offers you a soda and you start getting that healing spirit—that thing that gives you the drive to do more and do better for the community.”

A kid with no future
Jones grew up in economically depressed West Baltimore and had not yet finished high school when, in January 1983, just 26 days after his 17th birthday, he was arrested—and swiftly convicted—for an armed robbery and murder he says he was nowhere near. He began his sentence of life plus seven years at The Maryland Penitentiary at 954 Forest Street in Baltimore. “People used to call it 954 Forever Street because it was big and gray looked like a graveyard made of bricks like tombstones,” he says, recalling the hopelessness of those days.

“For the first year, I used to fight all the time,” says Jones. One altercation left him on lockup with a broken hand. “My grandmother came to visit, looked at me and just started crying. She said, ‘I can’t come here anymore. I can’t stand to see you like this.’

“I promised her I would do better,” he recalls.

Even as Jones was shuttled among six different prisons, he earned his GED, college degree in sociology, and a reputation for being a solid worker. By the time he marked his 27th year in prison, he was housed with parole violators at Patuxent Institution, where he made 85 cents an hour as an instructor in the prison’s sign-manufacturing plant.

The men on his cell tier confounded Jones: “These guys would get parole, go out, violate and come back. I would ask them, ‘What keeps you coming back three or four times?’ And they used to say, ‘There’s no support out there for guys getting out of prison, nobody to give you a job.’ I started writing stuff down—what I wanted to do when I get out.”

One day, a fellow inmate caught Jones reading the Maryland DMV’s driver’s manual. “He said, ‘You know something I don’t?’ And I said, ‘I know one day I’m going to be out and getting my driver’s license,’” recalls Jones. Six months later, on February 13, 2013, then-Gov. Martin O’Malley commuted Jones’ sentence and he was free.

Working with a counselor from Living Classrooms’ Adult Resource Center, Jones went to live at Patrick Allison House where a mentor showed him the ropes on everything that was new after 30 years behind bars—like bus passes and the grocery store’s self-checkout line. “I was afraid I’d do it wrong, walk out of the store, alarms would go off and I’d be sent back to prison,” explains Jones.

Then and there—not two months out—Jones started paying it forward. For other men and women coming home behind him, he started the First Monday Empowerment Support Group which meets in a Living Classrooms office space and gives former prisoners could get the kind of vital everyday help that Jones had received. “There’s so much that’s confusing. And the city had changed. I got lost just trying to get to a physical,” says Jones. “Guys coming home from serving 30, 40, 50 years—they need support.”

New dreams with an old love
Something else new to Jones on the outside? Facebook. With an aunt’s help on the site, he tracked down his sweetheart since 5th grade, Tessa, and presented her with the 30 years of birthday cards he’d made for her in prison. They wed in 2016. “I bought a home. I’m married. I got a nice car. My wife says I’m successful,” Jones says.

But it’s not enough.

Jones says “success” will be when he has his mortgage is paid off and he can get his 71-year-old mother a house of her own. The grandmother whose tears shook sense into him all those years ago passed before Jones’ release but he imagines she is proud of him. And he knows his mother is. “It’s the greatest feeling,” Jones says. “My mother talks about me all the time—my son, my son, my son. It brings tears to my eyes every time, that I made my mother proud.

Even that is not enough. Asked about his retirement dreams, Jones says he and Tessa want to open a transitional home like the Living Classrooms facility that was his lifeline.